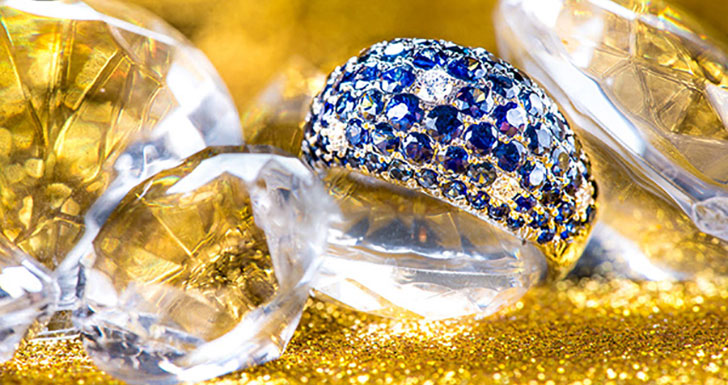 Traditionally, Sapphire symbolizes nobility, truth, sincerity, and faithfulness. It has decorated the robes of royalty and clergy members for centuries. Its extraordinary colour is the standard against which other blue gems—from topaz to tanzanite—are measured.

For centuries, sapphire has been associated with royalty and romance. The association was reinforced in 1981 when Britain’s Prince Charles gave a blue sapphire engagement ring to Lady Diana Spencer. Until her death in 1997, Princess Di, as she was known, charmed and captivated the world. Her sapphire ring helped link modern events with history and fairy tales.

In ancient Greece and Rome, kings and queens were convinced that blue sapphires protected their owners from envy and harm. During the Middle Ages, the clergy wore blue sapphires to symbolize Heaven, and ordinary folks thought the gem attracted heavenly blessings. In other times and places, people installed sapphires with the power to guard chastity, make peace between enemies, influence spirits, and reveal the secrets of oracles.
In folklore, history, art, and consumer awareness, Sapphire has always been associated with the colour blue. Its name comes from the Greek word sapphires, which probably referred to lapis lazuli. Most jewellery customers think all sapphires are blue, and when gem and jewellery professionals use the word “sapphire” alone, they normally mean “blue sapphire.”

A special orange pink sapphire colour is called padparadscha, which means “lotus flower” in Sinhalese, the language spoken in Sri Lanka. Stones from Sri Lanka were initially the only ones labelled with this marketable name. There’s no telling how many Padparadschas have been sifted from Sri Lankan river gravel throughout history. Sri Lankans have a special affection for the colour that’s traditionally been linked with their country.

Besides blue sapphire and ruby, the corundum family also includes so-called “fancy sapphires.” They come in violet, green, yellow, orange, pink, purple, and intermediate hues. Some stones exhibit the phenomenon known as colour change, most often going from blue in daylight or fluorescent lighting to purple under incandescent light. Sapphires can even be grey, black, or brown.

The mineral corundum is composed only of aluminium and oxygen, and it requires a growth environment that’s free of silicon. However, silicon is a very common element, making natural corundum relatively uncommon. In its purest state, corundum is actually colourless. Colorless sapphires were once popular diamond imitations, and they’ve staged a comeback as accent stones in recent years.

In the 1990s, discoveries in East Africa and Madagascar brought fancy sapphires widespread recognition. The new sources supplemented production from traditional ones like Sri Lanka and Madagascar and increased the availability of yellows, oranges, pinks, and purples.

Corundum can show a phenomenon called asterism, or the star effect. This phenomenon usually appears as a six-ray star pattern across a cabochon-cut stone’s curved surface. The star effect can be seen in ruby or any colour of sapphire, and it arises from white light reflecting from numerous tiny, oriented needle-like inclusions.

Both blue and fancy sapphires come from a variety of exotic sources including Madagascar, Tanzania, Sri Lanka, Myanmar, and Australia.